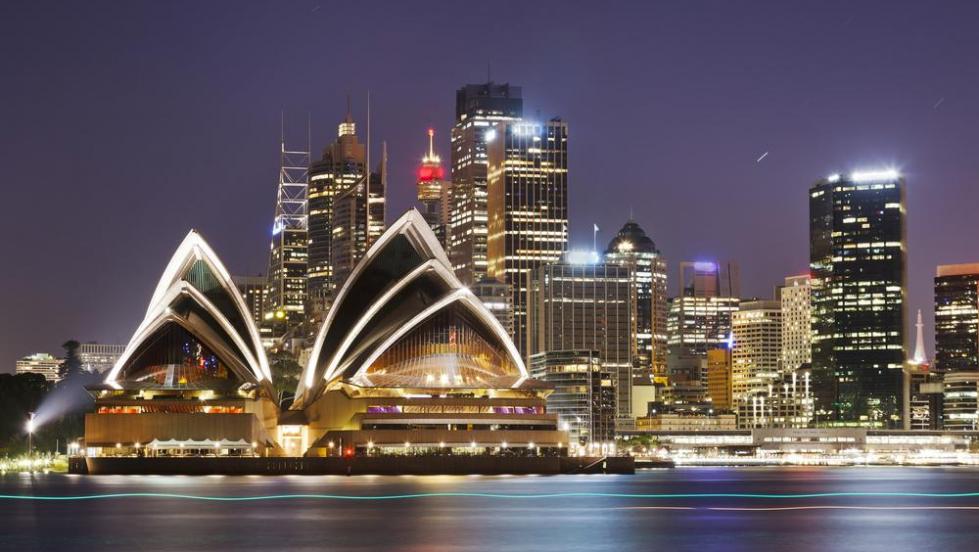 Human habitation of the Australian continent is estimated to have begun between 42,000 and 48,000 years ago, possibly with the migration of people by land bridges and short sea-crossings from what is now Southeast Asia. The first recorded European sighting of the Australian mainland, and the first recorded European landfall on the Australian continent (in 1606), are attributed to the Dutch. With the loss of its American colonies in 1783, the British Government sent a fleet of ships to establish a new penal colony in New South Wales. A camp was set up and the flag raised at Sydney Cove, Port Jackson, on 26 January 1788, a date which became Australia's national day, Australia Day, the first settlement led to the foundation of Sydney, and the exploration and settlement of other regions. Australia's size gives it a wide variety of landscapes, with tropical rainforests in the north-east, mountain ranges in the south-east, south-west and east, and dry desert in the centre. It is the flattest continent, with the oldest and least fertile soils; desert or semi-arid land commonly known as the outback makes up by far the largest portion of land. Although most of Australia is semi-arid or desert, it includes a diverse range of habitats from alpine heaths to tropical rainforests, and is recognised as a megadiverse country. Being south of the equator the summer months are from November to February and the winter months June, July and August. Most of the population well over 95% lives close to the coast in temperate regions.

The first Jews to come to Australia were eight English convicts transported to Botany Bay in 1788 aboard the First Fleet. The first move toward organisation in the community was the formation of a Chevra Kadisha (a Jewish burial society) in Sydney in 1817, but the allocation of land for a Jewish cemetery was not approved until 1832. In 1830 the first Jewish wedding in Australia was celebrated, the contracting parties being Moses Joseph and Rosetta Nathan. Most Australian Jews have a strong Jewish identity, even if this does not necessarily express itself in religious observance. There are three main streams of Judaism active in Australia: Orthodox (Modern and ultra-orthodox), Conservative and Reform. Statistics are only available for the Melbourne community, but they are considered representative of other Jewish communities around the country. In Melbourne, 6% of Jews identify themselves as 'strictly orthodox,' 33% as 'traditionally religious' and 15% as 'Liberal or Reform.' 43% consider themselves as 'Jewish but not religious,’ Australian Jewry is generally supportive of Israel. Melbourne Ports has the largest Jewish community of any electorate in Australia, accounting for 12.8% of the local population. Sydney’s Jewish community is considered one of the most thriving and dynamic in the diaspora. There are an estimated 50,000 Jews in New South Wales out of an Australian Jewish population of 120,000. Perth is also an important Jewish community. 75% of the Jewish community lives in 10 suburbs of Melbourne and Sydney, unsurprisingly these are the places that kosher restaurants, shops and synagogues can be found, although Perth, Adelaide, and Canberra have kosher facilities and Jewish communities.