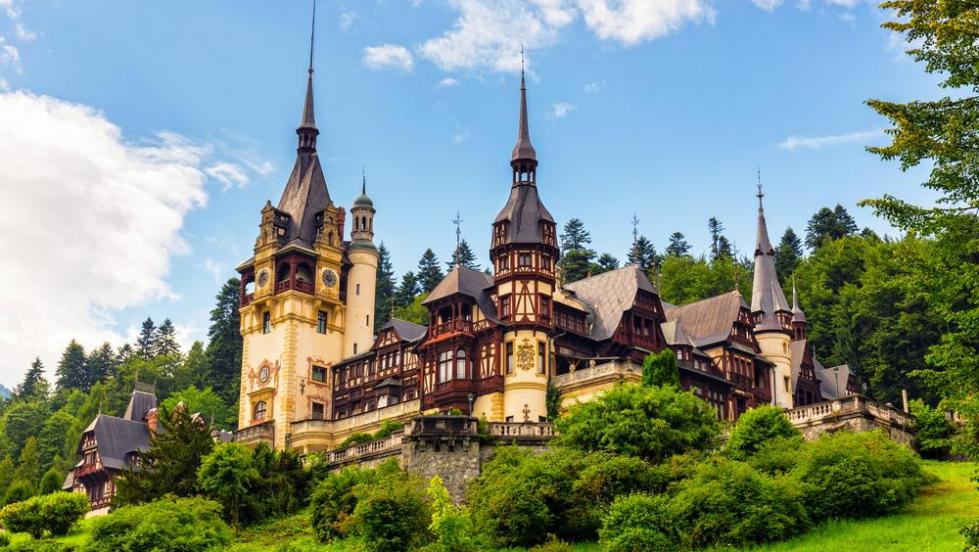 Romania is a southeastern European country known for the forested region of Transylvania, ringed by the Carpathian Mountains. Its preserved medieval towns include Sighişoara, and there are many fortified churches and castles, notably clifftop Bran Castle, long associated with the Dracula legend. Bucharest, the country’s capital, is the site of the gigantic, Communist-era Palatul Parlamentului government building. Romania is a sovereign state located in Southeastern Europe. It borders the Black Sea, Bulgaria, Ukraine, Hungary, Serbia, and Moldova. It has an area of 238,391 square kilometres (92,043 sq mi) and a temperate-continental climate. Romania has over 19 million inhabitants, its capital and largest city, Bucharest, is the sixth-largest city in the EU, with 1,883,425 inhabitants as of 2011. Modern Romania was formed in 1859 through a personal union of the Danubian Principalities of Moldavia and Wallachia. The new state, officially named Romania since 1866, gained independence from the Ottoman Empire in 1877. Owing to its distance from open sea and position on the southeastern portion of the European continent, Romania has a climate that is temperate and continental, with four distinct seasons. The popular summer attractions of Mamaia and other Black Sea Resorts attracted 1.3 million tourists in 2009. Most popular skiing resorts are along the Valea Prahovei and in Poiana Brașov. Castles in Transylvanian cities such as Sibiu, Brașov, and Sighișoara also attract a large number of tourists. Bran Castle, near Brașov, is one of the most famous attractions in Romania, drawing hundreds of thousands of tourists every year as it is often advertised as being Dracula's Castle.

Most Jews in Romania today are over the age of 70. Fewer than 1,000 are under the age of 25. Five thousand Jews live in Bucharest, and small Jewish communities exist in the principal towns of Moldavia-Iasi (Jassy), Dorahoi, Succeava, Radauti, and in Transylvania (Cluj, Arad, Timisoara, Satu Mare, TârguMures, Oradea, Baia Mare), as well as in Brasov, and also Constanta on the Black Sea coast. Almost none of these communities number more than a few hundred people and that number is dwindling fast. Nearly all the Jews are Ashkenazi and the small Sephardic community that once existed has lost its distinct identity. Yiddish is only spoken by the elderly. Many of the Jews in Transylvania, which was a part of Hungary until the end of World War I, speak Hungarian as well as Romanian. Jews have lived in Romania since Roman times, when the country was a province called Dacia. Organized communal life, however, dates back to the fifteenth century, by which time there were communities in Iasi and several other towns in Moldavia. Although the Orthodox Church bitterly opposed contacts with Jews, various local rulers encouraged Jews from Poland and elsewhere to settle in the country. Between 1898 and 1904 some 70,000 Jews left Romania for the United States, others settled in Palestine. Only after World War I was legislation enacted to emancipate Romanian Jewry. Jews served as traditional scapegoats in the struggle between the ruling classes and the peasantry. Despite their unfavourable situation, Jews played an important role in the transformation of Romania from a feudal system into a modern economy and were also active in the country's cultural life. Romania was the birthplace of the Yiddish theatre. It also produced many of the first chalutzim (pioneers) who settled in the Land of Israel. Rosh Pina and Zikhron Ya'akov, two of the oldest villages, were established by Romanian Jews. Bucharest and Oradea both maintain choirs. There is also a small Yiddish Theater that receives funding from the Bucharest municipality, and a monthly newspaper, Revista culturlui mozaic (published in Romanian, Hebrew and English). There is only one kosher restaurant in Bucharest.