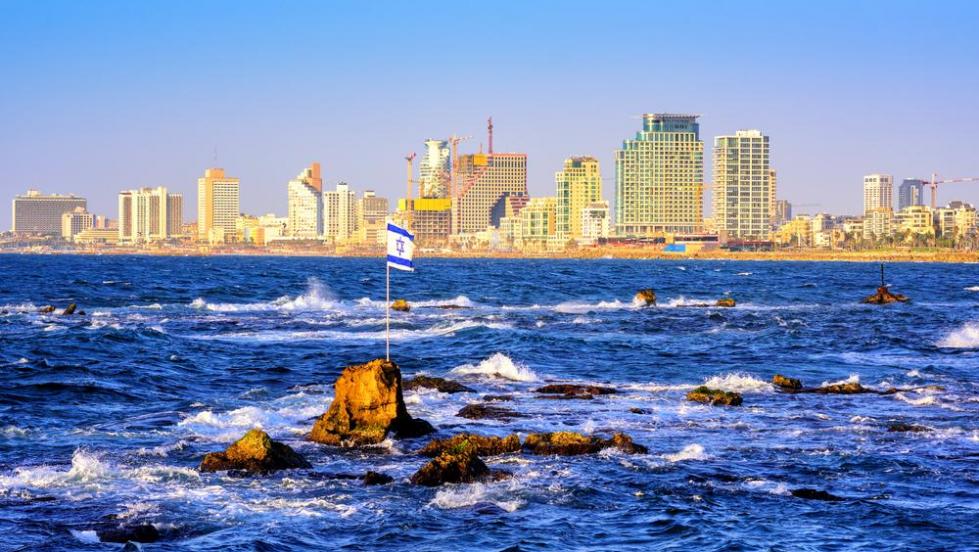 Israel is located in the Middle East, along the eastern coastline of the Mediterranean Sea, bordered by Lebanon, Syria, Jordan and Egypt. It lies at the junction of three continents: Europe, Asia and Africa. The country is just over 20,000km2 in area, with mountains and hills to the North which are covered in greenery all year, in the west there is a rift valley which runs North South and drops down to the lowest point on earth The Dead Sea or ים המלח (Salt Sea), rising up from there to the West there are the Judean Hills where Jerusalem the capital is situated. The South is a desert area which blooms in winter. The most Southern point is Eilat on the Red Sea with a climate that remains warm in winter 20c in the day and is hot in the summer. The general climate is described as Temperate with cool damp winters and hot dry summers. Most of the population is in the middle of the country from the 24 hour beach and party city of Tel Aviv to the historical tranquillity of Jerusalem, this is where most of the kosher restaurants are. As a tourist there are many different types of experiences to be had and many hotels to accommodate you. For a country the size of New Jersey, Israel's natural diversity is immense.

May 14th 1948 is the date that Israel independence was declared and it became a modern state. It is in the same area that two Jewish nations existed 2000 years and 2600 years previously. The population in 1948 was about 800,000 with a Jewish population of 600,000. Today (2017) the population has grown to 8.6 million with a Jewish population of nearly 6.5 million 75%. Most areas of the country has a Jewish majority the only place that it doesn’t is in the North where it forms the major minority. Historically Israel was a country formed in the late Bronze Age by tribes from the region under the leadership of Joshua 1250 BCE. The city of Jerusalem was created in about 1000 BCE by King David, his son King Solomon built many buildings there including the first Jewish Temple. Over time the country was split into two, the Northern Kingdom was lost, many of the Jewish inhabitants were taken away to other countries as slaves, and eventually the Romans under Emperor Hadrian banished Jews from Jerusalem and renamed the country Palestina (Palestine). There has been a Jewish presence in the land through most of the 35 centuries of Jewish existence, there are many archaeological ruins that back this up. There are many Jewish places of interest and kosher restaurants in most places these days. Synagogues are also to be found in most areas, and kosher restaurants and cafes are easy to find. Israel has a wide range of Jewish communities from very religious to completely non-religious and everything in between.