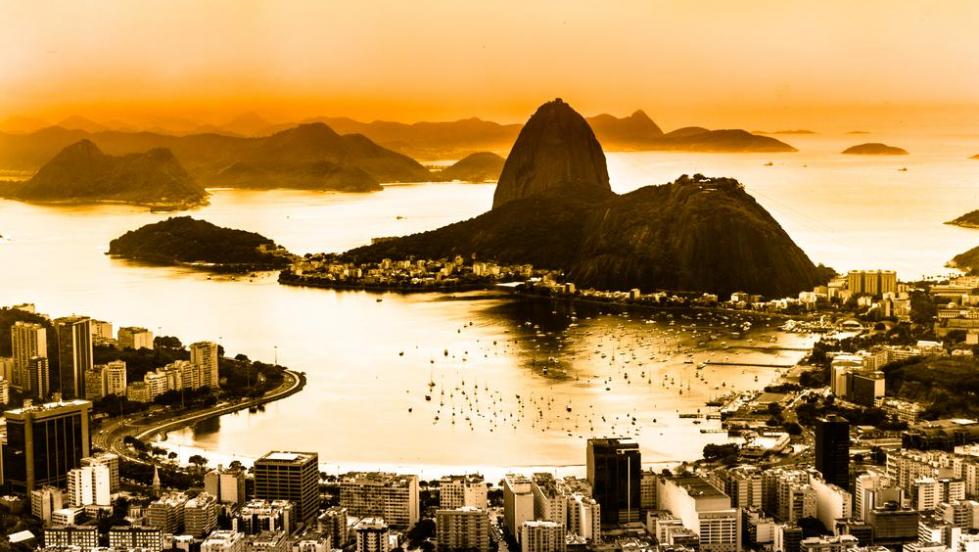 South America is a continent located in the western hemisphere, mostly in the southern hemisphere, with a relatively small portion in the northern hemisphere. It is bordered on the west by the Pacific Ocean and on the north and east by the Atlantic Ocean; North America and the Caribbean Sea lie to the northwest. South America has an area of 17,840,000 Km2 (6,890,000 sq mi). Its population as of 2005 has been estimated at more than 371,090,000 most of the population lives near the continent's western or eastern coasts while the interior and the far south are sparsely populated. . South America is home to the world's highest uninterrupted waterfall, Angel Falls in Venezuela; the highest single drop waterfall Kaieteur Falls in Guyana; the largest river (by volume), the Amazon River; the longest mountain range, the Andes, the driest non-polar place on earth, the Atacama Desert, the largest rainforest, the Amazon Rainforest; the highest capital city, La Paz, Bolivia; the highest commercially navigable lake in the world, Lake Titicaca; and, excluding research stations in Antarctica, the world's southernmost permanently inhabited community, Puerto Toro, Chile. The continent's cultural and ethnic outlook has its origin with the interaction of indigenous peoples with European conquerors and immigrants and, more locally, with African slaves. In 1494, Portugal and Spain, the two great maritime European powers of that time, on the expectation of new lands being discovered in the west, signed the Treaty of Tordesillas, by which they agreed, with the support of the Pope, that all the land outside Europe should be an exclusive duopoly between the two countries. The independence of South America was secured by Simón Bolívar (Venezuela) and José de San Martín (Argentina) by 1833. South America is a fantastic continent with beautiful scenery and beaches plus historical towns and cities.

Jews first came to South America with Spanish and Portuguese populations which were settling the area from the late 15th century onwards. This was the time of the Inquisition and Jews could not reveal their real identity and mostly had to hide their religion. The first openly Jewish community was in Dutch Brazil dating back to around 1632. By the mid-17th century, the largest Jewish communities in the Western Hemisphere were located in Suriname and Brazil. More immigrants went to this region as part of the massive emigration of Jews from Eastern Europe in the late 19th century. During and after World War II, many Ashkenazi Jews immigrated to South America for refuge. In the 21st century, less than 300,000 Jews live in Latin America. They are concentrated in Argentina, Brazil and Mexico, with the first considered the centre of the Jewish population in Latin America. The Jewish population of South America is not large, but most communities are close with good resources and access to kosher food. Argentina is the largest community with 180,000, Brazil is second with around 100,000. These two countries make up well over 90% of the Jewish population of the continent. There are 6 other countries with Jewish communities in excess of 1000.